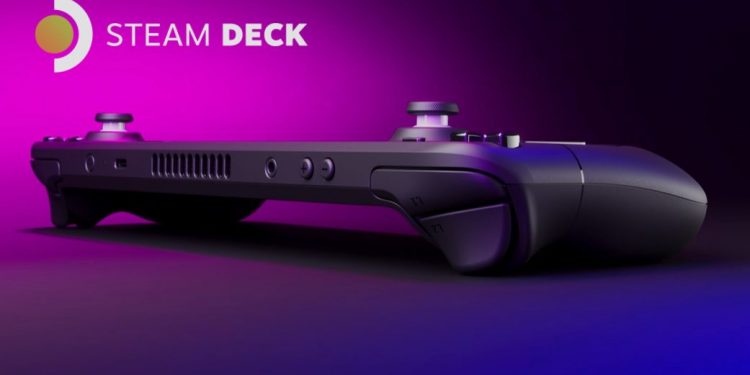 Everything that will let you decide between getting a Steam Deck VS Gaming Laptop is right here in our piece. Get indulgin’!

Pandemic or otherwise, gaming has become more popular among people of all ages as a favorite means to pass the time. Some do it for fun while others have taken it up professionally. Either way, there are many platforms and devices now available to satiate the urge of gaming, and while some prefer the ol’ PC, others now like to use portable devices like mobile phones, Nintendo Switch, the Steam Deck, etc.

In today’s article, we bring you the info to settle the Steam deck VS gaming laptop debate among your friends. Before we go into details, let’s take a brief look at what the Steam deck is.

What is Steam Deck?

Steam Deck is the latest handheld gaming system by Steam with lots of interesting features. What makes Steam Deck unique is its state-of-the-art hardware and its compatibility with all the games that you have in your Steam library.

It comes with an AMD APU with a Zen 2 4-core CPU that clocks at 2.4 – 3.5 GHz. The GPU on the Steam Deck, based on AMD’s architecture, has clock rates of up to 1.6 GHz which is easily comparable to a GTX 1050 dedicated graphics card!

The performance of this handheld device has been optimized for a stable 60 FPS on most of the games even though the screen is only 7 inches wide with a 1280×800 resolution at 60 Hz.

Now that we know what a Steam deck is, let’s get on to seeing how it does in comparison with a gaming laptop.

Steam Deck is an ideal machine for light gaming at 720P and it has medium graphics. Gaming laptops, on the other hand, are heavy powerhouses, with features such as 144 Hz refresh rates, FHD or 4K resolution, full-size (15.6-17 inches) screen size, sophisticated keyboards, touchpads, and so much more. The best gaming laptops can run most triple-A games at ultra-settings without any issue.

The main advantage that a Steam Deck poses is its cost. It starts at $399 which is way lesser than the most powerful gaming laptops currently available in the market today. It is evidently more portable and the added bonus is that it runs most games in the Steam library although it has mobile-grade hardware.

If you are a gaming enthusiast, you can your hands on both a gaming laptop and a Steam Deck. For the laptop, I recommend the Acer Nitro 5! Below is a comparison of some useful specs you should consider before deciding between Steam Deck VS gaming laptop.

Steam Deck is more portable than the gaming laptop as it’s the size of a small tablet. It weighs about 0.6 Kgs and can easily fit in any of your bags if you are on the move.

The Steam Deck does not require any special maintenance at all and works just fine with little cleaning or dusting as with the mobile phones or the tablets (unless like me, you can not resist wiping surfaces clean every day).

Transforms to a Mini-PC

Uninstall the Steam OS and install Linux or Windows and you are good to go! It can even be hooked up to an external display and used as a workstation. How cool is that!

Recently, it was announced that all the main gaming platforms like Origin, Uplay, Epic Games, etc will be compatible with Steam Deck, even Xbox Gamepass seems to be coming to the Steam Deck too. The more the merrier?!

Steam Deck comes with four back grip buttons that can be mapped to custom keys as required, making them practical features in so many games, especially ones with shooters! No more dragging that controller around!

As stated before, Steam Deck is extremely affordable as a gaming device as its price starts at $399 for the entry-level product. It can act as a portable computer as well, has mid-range hardware, and it has great potential for customization.

Although Steam Deck doesn’t have the most powerful hardware, its hardware is still pretty impressive for a portable device. At max, you will have to lower graphics on some of the games to make it work.

If you are worried about straining your eyes on the small screen or if you play for longer hours, the small size is compensated with the fact that you can hook it up to a bigger screen. You will have to compromise on the frame rate at resolutions higher than 1080P, though.

A gaming laptop brings along your desktop wherever you take it. Trending gaming laptops these days are coming in with a variety of specifications: powerful graphics cards like the mobile RTX 2060, processors such as i7 processors with 6 or more cores.

Most gaming laptops have large screens, such as 17 inches, and FHD or higher displays which add to the gaming experience. Not just for gaming, even for watching videos, or just plainly using your laptop as a workstation, everything is catered to.

On that note, you can use a Steam Deck as a PC too, and even sideload Windows on it, but that’s a subject for a different time. And gaming laptops also support more resolutions, 1080P being the most common, but some gaming laptops support 1440P and even 4K.

It’s a lot easier to type on a gaming laptop than a Steam Deck’s virtual touchscreen keyboard like those on mobile phones and tablets although Steam Deck will be compatible with Bluetooth keyboards and mouses in the future.

Gaming laptops are heavier as compared to Steam Deck which is important to consider if portability is a concern for you. This is an important parameter when debating the Steam Deck VS Gaming Laptop matter.

Gaming laptops come with powerful hardware put together in a small area so they’re prone to overheating, especially when under heavy usage.

If you are looking for a fun portable, handheld device for being on the go then Steam Deck is our recommendation hands down!

The screen size and weight plus graphics are ultimately where you have to decide what is your priority. Overall if you can afford to, we recommend trying out both devices to make a better decision! It is really worth all your money!