by DigitalPhablet
in Interesting
1 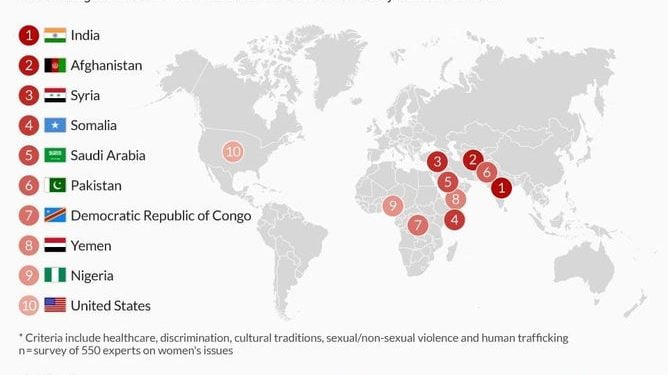 A latest studies conducted by Thomson Reuters Foundations published a study which unveiled the list of most dangerous countries for women in the world.

As per the list, India tops the list of the countries that are considered dangerous for women in the world.

The report is based on surveys of 550 research experts on women’s issues to find out which is the most dangerous countries for women and places in the world, on the basis human trafficking for domestic work, forced marriage, and labor, etc.

The research was conducted between March and May with research experts from Africa, Europe, the Americas, South Asia, South East Asia, and Pacific.

The respondents of this research were healthcare, professional, academics, government, and non-government workers, development specialists, social commentators and policy makers, who gave this research a wider focus and made it more solid.

In India, women faces acid attacks, physical abuse, child marriage, and genital mutilation and other risk women face in India as per the research.

Crime against women in India rose drastically to 83 percent between 2007 and 2016, as per Indian Government data presented in the study.

An official at the Karnataka State Government, Manjunath Gangadhara said, India has become a place that has disrespect for women, rape, assaults, and harassment which go unrecorded.

It is noted that India is continuously advancing in the field of Science and technology but it has become the worst place for women to live.

Meanwhile, Countries like the United States, Pakistan and the top five are also becoming tougher for women to live. The governments of the countries should do much more to focus on program that protects women rights.

Let us know what you think about it in the comments section below.