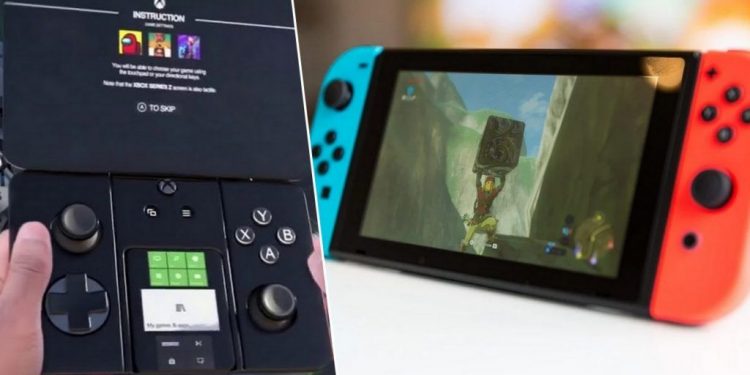 While it is just fan-craft at the moment, we would love to see Microsoft rolling out a similar version of the Xbox Series z Portable as seen in the famous video.

Microsoft is not a new name in the gaming world but it has stayed well away from manufacturing handheld products, and they have a good reason for it.

With Sony and Nintendo as competitors, it did not make sense for Microsoft to take part in a race it was bound to lose. Nintendo went ahead with Switch and received due acceptance by players, and Sony’s PSP was relatively successful, too.

Microsoft, however, hasn’t had the resources to create a portable device although fans and design enthusiasts keep on proposing one design after another for a very well-anticipated handheld gaming device.

A Glance At The Xbox Series Z Portable

The hype for Xbox Series Z rose when a design for the portable console surfaced on TikTok from widely followed videomaker imkashama. He is known for his futuristic, trendy designs for various products. His previous fabrications included a fold-up iPhone, an iPad, a smartwatch by Lamborghini, a sleek and innovative Xbox controller, and one for the PSP.

The Xbox Series Z Portable is just a concept for now, even though it has attracted so much attention that many are considering it to be a real deal. Microsoft has only recently launched the Xbox Series X and S, both consoles being made available since November 2020, so it does not make sense for them to crowd so many product announcements and releases together.

Yet still, let’s take a look at Imkashama’s bedazzling design for the Xbox Series Z Portable. We have gathered for our readers all the details shown in his video.

Features of The Futuristic Fandom

The design itself is immensely bewildering; a clamshell device opens up when the Xbox button, built into its lid is pressed, revealing a bezel-less screen plus a series of controls. There is a touch screen panel at the bottom of the device as well.

There is no exaggeration in saying that Ikashama has certainly designed a prototype of the Xbox Series Z Portable which is breathtaking, to say the least. On the Menu screen, games like Far Cry 6, FIFA 22, Among Us, Cyberpunk 2077, Gears 5, and others can be seen.

It’s a truly ingenious feat of engineering; with dedicated attention to detail as seen when the analog sticks pop up from their housing or when the touch screen slides into position on opening up of the handheld device.

No Future For The Portable Device Yet

The official take so far from Xbox’s boss Phil Spencer is that they don’t see Nintendo and Sony as competition and that their eyes are set on competing with tech giants Amazon and Google in the rising cloud-gaming space.

While you can still play Xbox games on either Game Pass or by purchasing them for the Xbox Series X and Series S, one should never give up on the idea of seeing something as lustrous as a chic, portable console in the future, maybe sooner than expected. With innovations being a need of the hour for big companies to survive, it will be no surprise to see Microsoft boarding the handheld gaming devices’ bandwagon.