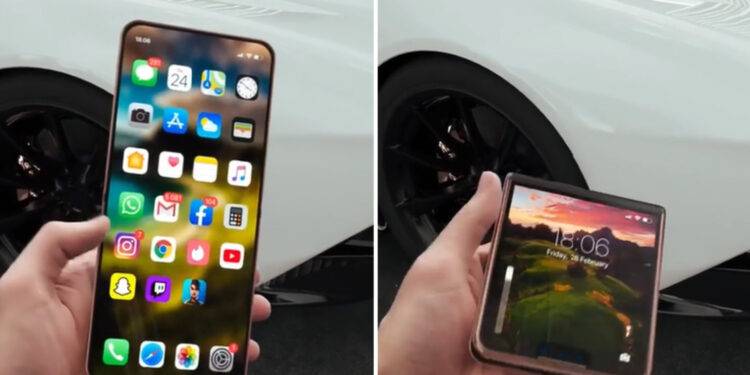 Apple is working their way to launching their new Foldable iPhone by the summer of 2021, competing in the race of Foldable smartphones.

As the giants, Huawei, Motorolla, and Samsung have planned to create foldable smartphones, it isn’t something to be surprised when we hear rumors that Apple might, apparently, be under deciding something similar to it. But until then, a video has been posted on Youtube channel and ConceptsiPhone revealed a foldable iPhone about which we think looks amazing.

This foldable concept of the iPhone would be slightly separate from the traditional foldable smartphones, which is similar to the tablet-smartphone hybrid rather than it gives a look similar to the Samsung Galaxy Z Flip and the Motorolla Razor, where it is developed in a manner that it can be folded to get the size decreased, in spite of the commonly shaped smartphone which can be opened to form a tablet.

The consequent i.e. the coming iPhones in the line are the pieces from the iPhone 12 series, and we are pretty sure about the way these devices would shake out. Users expect the models of iPhone 13 foldable at 5.4 to 6.1-inch sizes besides the iPhone Pro devices at the size of 6.1 and 6.7 inches. There is a possibility that these Pro models would feature triple-lens rear cameras with the LiDAR sensors, probably faster 5G connection, and 120Hz ProMotion displays, credit goes to millimeter-wave support.

The point to be noted is that we should remember it is an idea and totally a possible leak.