by Zainab Fatima
in Gaming
0 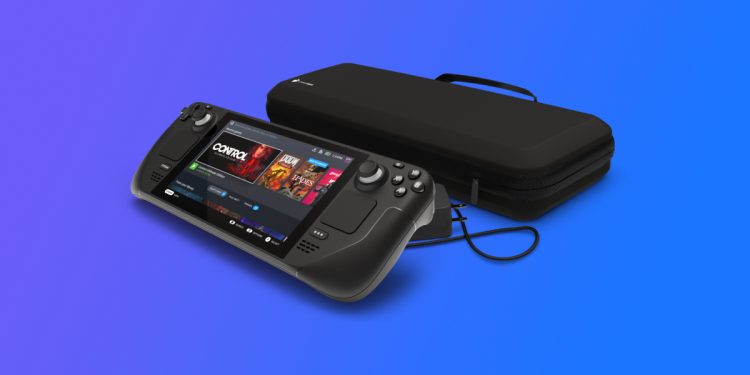 Announced on July 15, 2021, Steam Deck is a powerful handheld gaming computer like a Switch console. However, it is not just a gaming console; it is a portable PC.

You can use it just like you would use a regular PC; for downloading apps, playing games, and streaming movies and shows. Valve Corporation partnered with AMD to bring a dynamic gaming unit with a mix of hardware and software features that bring the best gaming experience to Steam users.

The best part of Steam Deck is that it allows you to play almost all the games in your Steam library. Besides the games, you can also access other Steam features on your Steam Deck.

The Steam Deck is a lot like Nintendo’s Switch, but the unit is so much more than a gaming console. The portable PC will be able to run the new Linux-based SteamOS. You will still be able to run Windows apps and games due to Valve’s compatibility technology. If you think SteamOS is not for you, you can uninstall it and run your Windows OS on it.

One of the top features of Steam Deck is the custom accelerated processing unit (APU) by AMD based on their architectures for Zen 2 and RDNA 2.

This feature in Steam Deck is yet to be experienced in any other gaming PC. The AMD processor includes four Zen 2 cores, running on eight threads coupled with a GPU working on eight compute units, giving a brilliant performance of 1.6TFLOPS.

The RDNA 2 architecture supporting the GPU and its 512 cores give the portable PC a spectacular graphic experience.

For storage, there are three different options available for users to choose from; 64GB, 256GB, and 512GB SSD. The ideal choice for storage capacity would be the 512GB model since games are heavy and need more room to function properly.

The super-fast NVMe SSDs allow for a high-quality experience with bandwidths up to 3000MB/second.

Given the speedy SSD, the 256GB storage option would also be a great fit for people who can compromise with a slightly smaller storage capacity. The speeds remain the same for the 256GB SSD.

The 64GB option comes with an eMMC drive which is no match for an NVMe drive in terms of speed. The minimal storage capacity of 64GB is also not optimal for serious gamers.

However, if someone is looking for a newer version of an indie console, the 64GB storage capacity could work out well for them.

Additional storage space is also provided through a microSD card slot. This card slot can support both microSDXC and microSDHC formats.

The display for the handheld unit is a 7inch touch-sensitive LCD with a resolution of 1280×800 pixels and a refresh rate of 60 Hz.

Steam Deck supports most of the games and features of Steam which is why gamers across the globe are so excited to try this new gaming unit to experience their favorite games differently.

Here is a list of the games supported by Steam Deck that you can play with your friends and colleagues as soon as it launches in December 2021.

However, it is essential to note the games that are not supported by Steam Deck and can not be played on the brand-new PC-cum-console.

With the announcement of Steam Deck, Nintendo’s Switch faced a downward spiral in popularity owing to the extraordinary features that Steam Deck brings, coupled with Nintendo’s ineffective updates that had barely excited the users.

Valve’s portable PC/console brought an enticing opportunity to video gamers all around the world.

The main reason why people draw comparisons between the Steam Deck and Nintendo Switch is their body, which looks almost alike.

However, this is where the similarities between the two gaming consoles end.

The Steam Deck is slightly heavier than Switch and has wider dimensions.

The specifications of both consoles are vastly different from each other, signifying how creators manufactured both devices for a diverse target audience.

Before moving onto the differences between the devices, it should be made clear that Steam Deck is not just a console; it is meant to be a handheld gaming PC. For this reason, it has better specifications than that Switch.

It also has 16GB LPDDR5 RAM, which is perfect for the handheld console as it consumes less power.

On the other hand, Nintendo Switch is still using Nvidia Tegra X1 with Maxwell architecture GPU.

However, Nintendo Switch trumps Steam Deck when it comes to battery life.

Since Steam Deck supports better quality screen time and game sizes, it has a shorter battery life of about 2 to 8 hours, whereas Nintendo Switch can easily go from 4 to 9 hours.

One of the primary reasons why Nintendo believes that Steam Deck is trying to replace it is Steam Deck’s pricing strategy.

Steam Deck is a handheld full-fledged gaming computer with hefty hardware; it should be priced within the same range as other handheld PCs.

The price range for handheld PCs usually centers around $1000. However, even the most expensive Steam Deck PC, the 512GB unit, is only $649.

Steam Deck places Steam Deck in a really affordable and accessible range and makes it a competitor for Nintendo Switch, which retails at $349, which is just $50 short of the 64GB Steam Deck.

This negligible difference in prices with the substantial difference in hardware and performance makes Steam Deck a better purchase for the typical audience.

The three variations of Steam Deck handheld PC come at 64GB, 256GB, and 512GB. The prices for these consoles are quite meager for a handheld PC with a plethora of features like Steam Deck and makes it a tough competition for Nintendo Switch, which was previously the most popular console in this range.

However, with the shipping starting in December 2021, the ETA for order deliveries is 2022. You can get the Steam Deck for as low as $399 by reserving the console on the Steam Deck website.

The reservation costs $5, only making it easy for everyone to secure their units. This ease of access ended up crashing the reservation page when it went live.

When the Steam Deck is available, you can either proceed to buy it, and your $5 deposit will count towards the cost.

If you change your mind and decide against buying the Steam Deck, your $5 will be refunded.