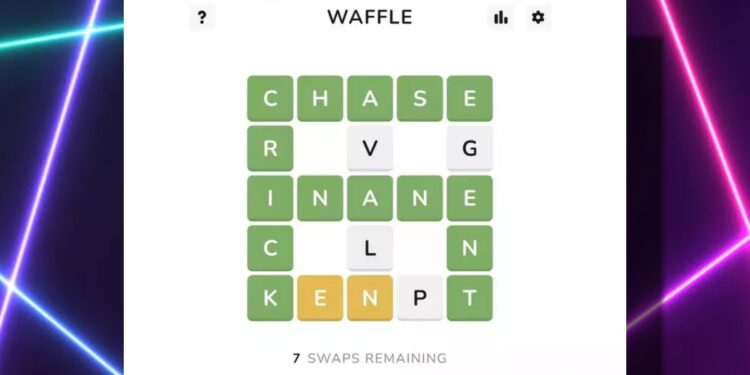 If you’re looking for an alternative to the well-known Wordle game, you may want to give Waffle Wordle a try.

What is Waffle Wordle?

Like Wordle, Waffle requires you to guess six words rather than just one, like Wordle. A grid of green, yellow, and white words is available in the game, and the words can be swapped to make six words. Swapping the words gives you 15 chances. Waffles can be solved in 10 attempts, according to the website.

It indicates that the tiles are in the right position when they are green. A yellow tile indicates that it belongs to the word but needs to be positioned differently. White tiles should be replaced in that word as they don’t belong there.

The game ends when all the tiles have been placed correctly or when you have exhausted your chances. You can only play the game once per day, like Wordle, since it resets every 24 hours.

You should give Waffle a try if you are looking for a challenge.

There is no need for a powerful device or a console to play Wordle, which has become one of the most popular games this year. New York Times acquired the word game in a seven-figure deal after it took the internet by storm.

Most Wordle variants use a linear design; guess the five-letter word in six attempts. Waffle, on the other hand, is shaking things up in the best way possible. It will ask you to guess six words, three horizontally and three vertically. This is a fun twist on the original game that combines crossword puzzles and Rubik’s cubes.

How To Play Waffle?

In addition to giving you all the letters you need for the day’s puzzle, Waffle makes it more challenging by placing some letters wrongly. Make sure you don’t drag and swap every square all at once – you only have 15 swaps (moves) to make the magic happen. Once you’ve made a move, you won’t know whether it’s correct or not. It is possible to solve every game within 10 moves, according to the game’s developer.’

As you complete each move beyond those 10, you’ll earn stars. As a result, you will earn three stars if you succeed in 12 moves. Waffle also keeps track of your player statistics, so you can check how many games you’ve played, how many stars you’ve earned, and how many winning streaks you’ve had.

Wordle alternatives include Waffle and Heardle, which use music instead of words, as well as Quordle, which requires you to solve four puzzles simultaneously in just nine guesses. Some fans ported the game to a Game Boy console, turning your answers into weird little houses.

Where we can find the waffle wordle archive?

Waffle does not provide any sort of archive to keep the game interesting. However, you can see the cached version of the game on the Internet Archives’ website.