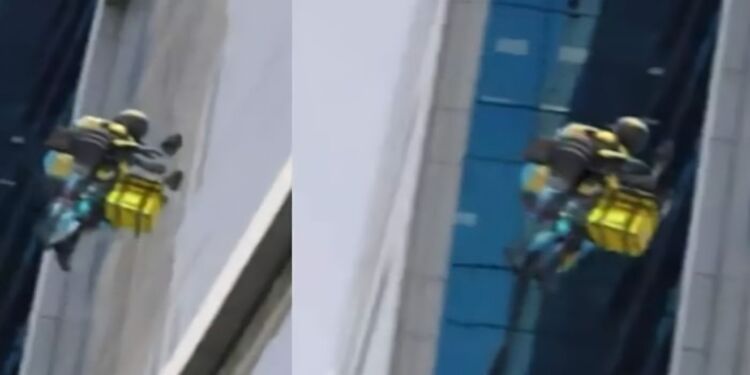 A Saudi Arabian employee is seen in a video flying off with goods. There has been a surge in viral videos on social media.

There is a flying delivery man. They are delivering the goods to the doorstep.

In the video, you can see what is shown. In the video, however, it is unclear which employee belongs to which company. There is no information as to where the incident occurred in Saudi Arabia

The employee uses a jetpack to deliver the goods to the doorstep. Following that, the aircraft will land safely. In the video, you can see the goods being given. The employee can also be seen descending from the top of a building with supplies to another building in another video. Saudi Arabia has reportedly delivered the footage.

Saudi Arabia will use drones to deliver goods to customers. Recently, it was reported that Saudi technology is being used extensively. Recently, news has broken that a company in Riyadh is bringing the service of ‘flying men’ for delivery. Discussions about this topic were extensive. Currently, the video of the flying man is gaining a great deal of attention on social media. However, the video has not yet been released with any further information. There are no further details available.

This video highlights the use of drones by some restaurants worldwide to deliver pizza and food orders. Drones are used to locate customers via GPS and video cameras to ensure they reach the correct recipient within a short time.

Undoubtedly, the global food delivery industry is growing at a rate of 10% annually. By 2030, the market is expected to reach $365 billion, while the Middle East and North Africa are not isolated from this trend, with revenues exceeding $9 billion in March 2021, a 75% increase from March 2020.