by Seok Chen
in Technology
3 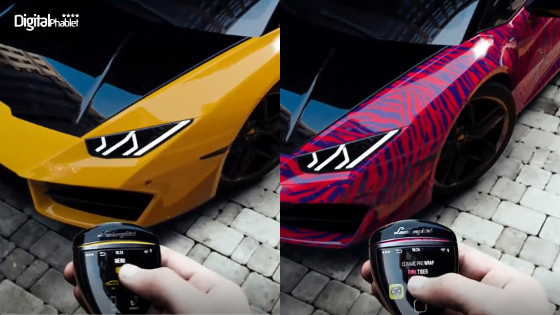 The new Lamborghini comes with a feature that allows you to change its color right from the Key panel, it happens instantly and helps you match your own taste.

Instagram account Bat.not.bad get his hands on this new car, which he tested and uploaded on his Instagram to show the world how cool is this.

Here is the video of color changing Lamborghini

This new innovation will help the makers of the vehicle to have an edge over their competitors as a person does not have to stick with a single color after spending a lot of money into a luxury car.

Lamborghini is famous for its look, speed, and the comfort, making it one of the highest costing vehicle in the world.

It has been owned by many famous personalities including Justin Bieber, Deadmau5, Salena Gomez and many other celebrities in Hollywood.

Recently, they have also launched in the Lego version of Lamborghini showcased in Dubai, UAE on which Bat.not.bad got his hands on and showed its beautiful key to the world.

Lego version of this car looked nice but many people did not prefer buying it. However, with this new color changing feature is indeed worth looking at.

This version of Lamborghini is still in the production process and there is no date that has been revealed by the company about its launch date.

As well as the price of this new vehicle is also undisclosed as the hands-on had been given to selected influencers all around the world.

Where to get color changing Lamborghini key

This is still not confirmed that where can a person get this color changing Lamborghini key fob. Digital Phablet also reached out to the management of Lamborghini to have a word on it.

Meanwhile, it’s competitor Tesla is vowing to introduce more self-driven cars on roads to eliminate the need for the driver for the owners, which can also be a great unique selling point for Tesla in near future.