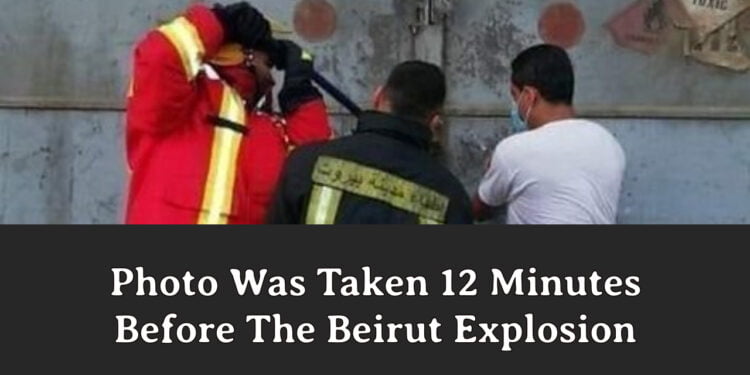 This happened 12 Minutes before the deadly Beirut blast, one of the worst-hit disasters ever happened to Lebanon.

Beirut explosion is one of the worst incidents that took place in 2020, killing hundreds of people, 300,000 got homeless and thousands were injured.

Here is the picture that was taken 12 minutes before the horrific Beirut explosion. This is indeed a very terrifying picture on the internet right now.

The picture shows three firefighters who were called to control the fire that had broken out at the Port of Beirut before the deadly explosion.

These three firefighters can be seen trying to break open the door of warehouse no 12 at the Port of Beirut. This very warehouse, no. 12, contained 2,750 tons of ammonia nitrate, while these firefighters were trying to control the fire, a large explosion happened which was seen by the world and recorded by the eyewitnesses.

People keep praising these firefighters all over the world as they will always be remembered to the first-responders to this deadly explosion. After them, a team of 10 fire-fighters also joined them to control the flames.

People have been praising their bravery that they responded to the call of duty without even knowing this is the last day of their life. These three firefighters were never found, including the person who took this picture.