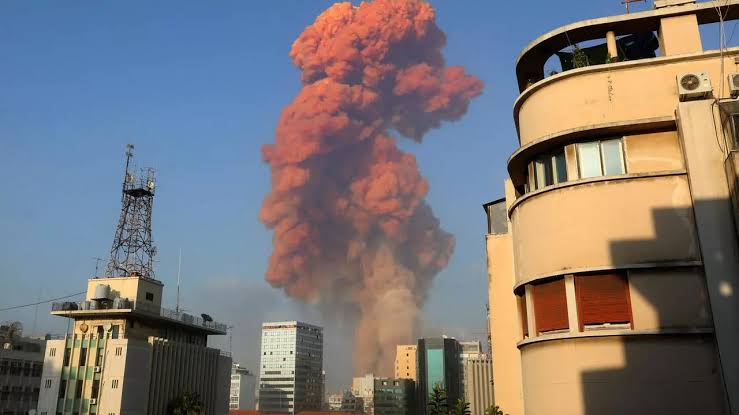 Labenon’s capital city Beirut blast shakes up the city. The Beirut blast has been captured by many on the video.

The satellite images of before and after Beirut Blast. Emergency have been declared in the city of Beirut by the authorities.

300,000 people displaced after the Beirut blasts. These people have been kept in shelters as the wounded are being treated.

Custom head of Lebanon, Badri Daher confirms sending six warning letters to the judiciary about having lethal substances stored at the port of Beirut.

90% of the Hotels in Beirut have been destroyed. European Union has pledged financial aid for Beirut.

Health Minister of Labenon confirmed that Hunderds of people have been reported missing by a number of families.

The blast has resulted in damages worth $5 billion to the Lebanese economy. Lebanese Red Cross has set up shelters in Beirut for 1,000 families and the blood donation is being encouraged to help those in need.

The twin blasts took place at the port of beirut, the windows and other glass doors have been broken. Locals came out of their houses and restaurants screaming.

Wounded have been shifted to the hospital after found injured on the ground.

Health officials have been reporting a high number of injuries.

Labenon’s news agency have been reported that the blast was caused by the fire in the firework warehouse.

According to the Health Minister, Hamad Hassan, over 5,000 people have been wounded. All the hospitals across the city have been full, many turned away from the hospital because of no beds.

Prime Minister of Lebanon has declared Wednesday a day of mourning. The country has been put on high alert. As per the latest news, over 100 people have been killed in the deadly blast.

According to the police, there were two huge explosions which resulted in lots of deaths and injuries. According to the CNN news, eyewitnesses see a boat blasting first before the deadly blasts.

Before and After the Blast (Pictures)

Prime Minister of Lebanon, Hassan Diab’s house has also been damaged due to the blasts. People have been told to wear a mask because of the toxic gases in the city after the blast.

According to the geophysicist, Don Blakeman, the blast created the impact equivalent to 3.3 magnitude earthquake.

France24’s correspondent based in Lebanon, Leila Molana Allen took to Twitter to announced her apartment has blown apart by the blasts and thinks it was a missile from a jet.

My apartment in Beirut was just blown apart. We think it was a missile from a jet. We're ok.

PM of Lebanon Hassan Diab has said that about 2,750 metric tons of ammonium nitrate were stored at the port for last six-year, which is used as an agriculture fertilizer.

More details will be updated…