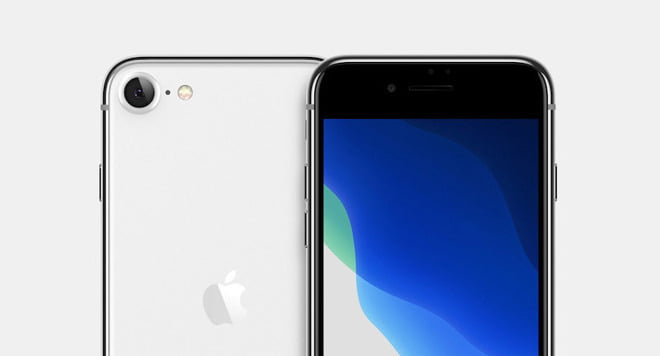 Nicknamed Apple iPhone SE 2020 (or iPhone 9), the new Apple smartphone expected at the start of the year should combine old design and recent components to offer a smartphone at a rather aggressive price for Apple.

The iPhone SE 2020 (previously thought to be called iPhone 9), has been the subject of many rumors and leaks for many months. Its launch would be scheduled for March and we have gathered here everything we know about its characteristics, price and design.

Almost all rumors around the iPhone SE 2020 point to reuse of the design of the iPhone 8. The biggest leak was published by OnLeaks and allows you to discover the design of this iPhone in detail through several images. These images were taken from factory plans.

Like the iPhone 8, the iPhone SE 2020 would therefore integrate a 4.7-inch screen in 16: 9 format with wide borders above and below the screen. A design dated at the time when almost all smartphones offer edge-to-edge screens.

This design will allow Apple to recycle its Touch ID fingerprint readers since it is a biometric sensor of this type that should be found on the front of the smartphone. Again, at the time of facial recognition and fingerprint readers below the screen surface, this element of design could seem quite dated.

You can see on the back the use of a photo module with a single sensor. An element that completely disappeared from the iPhone 11 range in 2020. The rear should be plastic or glass to allow wireless charging, but it is not known if Apple will apply the same frosted effect as on the iPhone 11 to create a coherent range or not.

First rumored to be “iPhone SE 2,” Apple’s next iPhone has been known for a long time as the iPhone 9. The iPhone SE is what it should be. make its official appearance.

The iPhone SE was unveiled by Apple in March 2016, about 4 years ago. This very particular model of iPhone fulfilled several missions:

Since 2016, the design and components of the iPhone have evolved. Apple has also marked a break by revealing the iPhone X (or iPhone “ten”) with the design that we know well today, in addition to the iPhone 8 which used the old format of iPhone (used from iPhone 6).

The iPhone we are talking about here is clearly the successor to the iPhone SE because it incorporates the last two characteristics listed here while offering a compact format if we look at the releases of smartphones in 2020.

The suspense is however no longer required since Apple has added compatibility ” iPhone SE ” to one of its screen protectors sold on its online store , before quickly removing this mention.

It Features Apple A13 Chip

Like the iPhone SE of 2016, this 2020 model should, therefore, offer the latest generation components with an old design. In our case, this means that the iPhone 9 would integrate an Apple A13 Bionic chip engraved in 7 nm, which we find in the iPhone 11 today.

We hope that this will allow the iPhone SE 2020 to offer the same excellent autonomy as the iPhone 11. This would especially allow the smartphone to run all applications and all games with extreme fluidity.

The screen should consist of a 4.7-inch IPS LCD panel with a definition of 1280 x 720 pixels, which should guarantee the smartphone excellent performance, including on the most demanding games on the platform. In fact, the Apple A13 chip has been calibrated for the 2,688 x 1,242 pixel screen of the iPhone 11 Pro Max , a definition much higher than that expected on the iPhone SE 2020.

The selling price of this new iPhone SE should be one of the key features of the phone. According to rumors concerning the smartphone, it would be launched at less than 500 euros in Europe.

It should in any case replace the iPhone 8 in the Apple range. The latter is currently marketed from 539 euros by the brand for the 64 GB version.

If these rumors are confirmed, it will therefore be possible to acquire an iPhone with the latest generation of processor, and therefore updates for the years to come, for around 500 euros. Today, to benefit from these elements, it is to the iPhone 11 from 809 euros that we must turn. The iPhone 9 could therefore easily find its audience.

All the rumors around the iPhone SE 2020 were pointing to a presentation conference in March, with production scheduled to start in February. Problem, the Coronavirus epidemic in China has sharply reduced smartphone production, especially at Foxconn, and this new iPhone seems to have been rejected by Apple.

According to MacRumors, the Apple Store is nevertheless ready for launch, which suggests that it is only a matter of days. Some stores have also received accessories for the future device.

It was also on this occasion that Apple had to unveil its new Apple Tag product, failing to have done so during the presentation of the new iPad Pro .