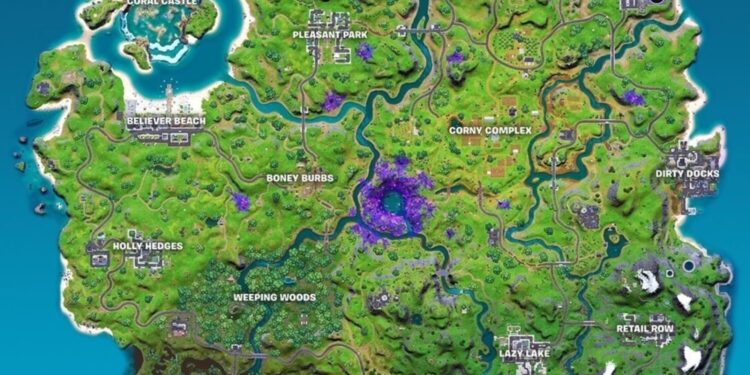 The best landing spots in Fornite is one that offers more than just loot.

It’s essential to get items and weapons early. Still, the new Chapter map offers a few locations where you can grab even more, such as unique cover, vehicles, and easy access to essential NPCs.

Unlike some of the previous Chapter’s best landing spots, most of the new Chapter’s top picks don’t allow us to stay before the storm closes. Unless you want to risk getting caught in the storm, you’ll need to finish your work quickly.

Among the few places where you won’t get cut off on the first shrinkage of the storm is Shifty Shafts. Shifty Shafts makes up for what it lacks in loot with its hideouts–and, usually, a good number of items dropped by players who weren’t so lucky.

Even though you don’t have to build anything, the shafts have solid defensive potential. Still, if you choose to construct some structures, the shafts become a veritable fortress until the storm closes in.

Consider dropping here first if you don’t want to fight for a while unless the Battle Bus flies directly overhead.

You’ll find plenty of amenities in Sleepy Sound to make each battle a bit easier. It’s more than just an essential neighborhood in the new Chapter.

Aside from the quiet houses full of chests and the streets full of materials for harvesting, you can fish in the water, steal cars, and refuel at gas stations.

Sleepy Sound is far north, so that’s the only downside. In most cases, you’ll want to get through this area quickly before the storm cuts you off.

Chonker’s Speedway and its dirt track race course stand out among the more special zones in the Season. With more than 30 chests to loot, the Speedway provides a good mix of cover and loot.

You’ll find the Seven Outpost in the southeast of the area, where you can purchase high-level items. You can also hop in several sports cars with off-road tires at a speedway, as you’d expect.

No matter if you’re up for a ride around the race course or just want to make tracks across the rest of the map, that’s great.

Camp Cuddle may seem like an odd choice for a good landing spot, but that makes it unique. The area offers just enough loot to get started, four NPCs who may appear there, and plenty of fishing opportunities for those who enjoy the activity. It’s the perfect place to land if you’re looking to start your match in a quieter and more relaxed way.

Before you leave, travel north and visit the Seven Outpost near the coast.

The risk involved in dropping in Sanctuary is rather high, but the rewards might be worth it. When there aren’t any other people in the area, you have the advantage of picking off explorers on their way to the islands.

Several NPCs, including The Visitor and The Foundation, can be found on the islands, along with good loot to set yourself up. On the southeastern island, there’s even a Seven Outpost.

It’s not a place you want to linger, like Sleepy Sound. The fact that it’s on the edge of the map means it’s often swept up in the storm within a few minutes.

Not just because it contains nearly five dozen chests, but because it is one of the Season’s top drop spots. This building complex is a bit of a labyrinth, which means you can hide, set traps, or even stash some extra items while looting the area.

Despite its close proximity to the edge of the map, the Bugle can be an excellent place to organize your inventory and see a few competitors drop before jumping in yourself–literally, if you use the Bugle’s trampolines to move around.