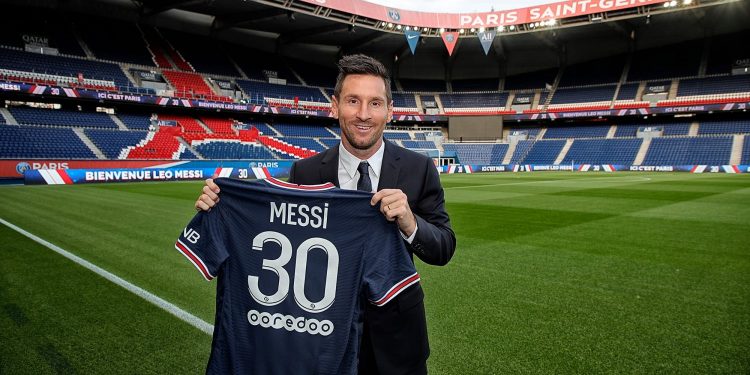 Salary in Cryptocurrency? PSG took over Spain’s mantle of ‘the home for “galacticos”’ by signing up the legendary 34-year-old Argentine Lionel Messi on a free transfer last Tuesday.

After spending two decades at Barcelona, his contract ended in June. Under immense debt, Barcelona had no choice but to let their star striker go.

Messi deemed his transfer from Barca “very tough” during his press conference on Wednesday. He expressed his excitement to play with the current squad of PSG, though, to try and take on the Champions League title.

My goal and my dream are to win the Champions League once more. I think that we have the team to do it here. The squad and coaches here are capable of winning everything, which is my objective. The team here is incredible.

Reuters’ Simon Evans reported on Thursday that Messi’s PSG contract includes an annual salary estimated between $29-35 million (€25-30 million), an option for a third season, and a WELCOME PACKAGE featuring payment in the club’s cryptocurrency fan tokens (tradeable currency with ever-changing value that has recently been used by clubs to generate additional cash flow) estimated to be worth €25-30 million (£21-25 million).

Messi To Get His Salary In Cryptocurrency

Chief Partnerships Officer Marc Armstrong said that PSG has been able to “engage with a new global audience, creating a significant digital revenue stream,” with the addition of cryptocurrency tokens to the club’s economy.

As expected, according to CoinMarketCap, with Messi’s transfer, the Socios based fan tokens climbed over 130 percent in five days to a peak of over $60 (€51), fading then to a little over $41 (€35) early Thursday.

Les Parisiens reportedly capitalized on the increased value by earning at least $17.6 million (€15 million) from the token sales.

PSG is scheduled to return to action on Saturday with their first home fixture of the campaign against Strasbourg where Messi may make a debut.