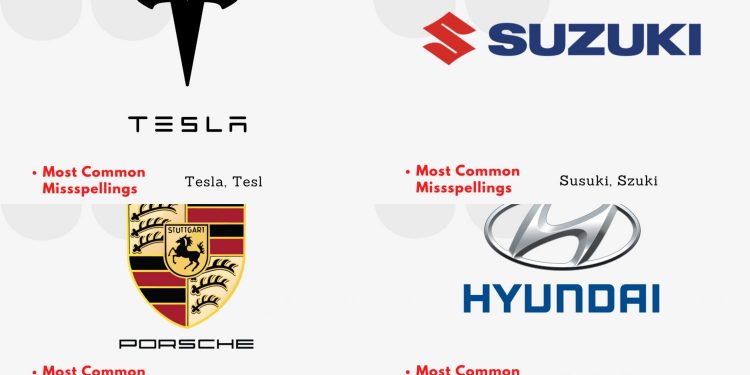 These are the car brand names that people usually write wrong, at least once! Here are those brands which are often written wrong.

The Hyundai brand is the one that web users struggle to spell correctly more than any other. A survey conducted by confused.com shows that the Korean company, which in the meantime is reflecting on the business of the future, came out on top, thanks to a huge lead over the first follower, Volkswagen, which “limps” with just over a million incorrect searches, buffered by Porsche that follows at a hundred thousand lengths following.

The most common mistakes in spelling Hyundai are Hundai and Hyndai. Volkswagen instead pays V and W, reversed on 309 thousand occasions, while the English wagon becomes the German wagen, adding up to more than one million monthly errors.

The third brand, Porsche, becomes Porsche in 735 thousand cases per month (and probably most of the errors come from Italian automatic correctors, ed ), and closes the mini ranking of brands in the top million most incorrectly typed words per month: from Toyota down, they are all below it.

As one scroll through the ranking, Susuki also stands out for sympathy, perhaps due to the peculiar pronunciation of the commercials, and Buggati, a technical term as well used in Italian jargon that refers to problematic.

There are 1,200 instances of Fiat being misspelled every month, the most common mistakes are Fiaat (of Dutch origin?) and Fiatt. Neither Ferrari nor other Italian brands are listed.

Kia, for example, is among the easiest brands for Internet users to remember and write: on average, it is written incorrectly just a handful of times per month.

As we can see from the ranking, Range Rover is at the top, which on average pays more than 200,000 wrong entries a month: Rang Rover and Range River are the most common errors.

Hyundai remains the leader, and Tucson comes in second not because the model name is incorrect, but rather because it is the name of the brand, and the same fate holds true for Porsche, which seals the podium with Cayenne as well.