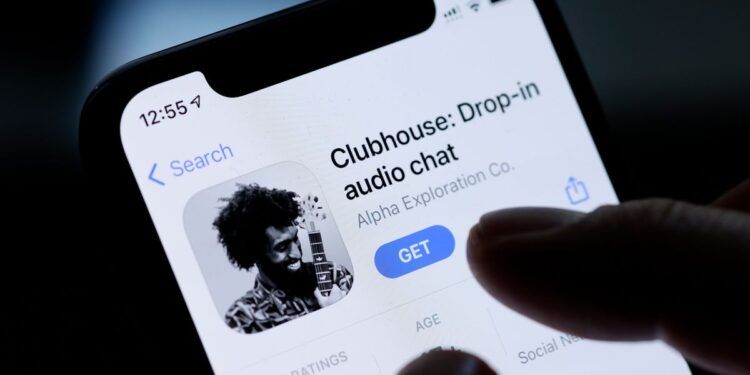 AAA new social networks wanted. After Tic toc, the task of throwing the gauntlet of the social network giants could fall to Clubhouse, the service born in 2020 from an idea of ​​the couple Paul Davison e Rohan Seth (an entrepreneur and an engineer) and which these days is hit the headlines for the funding received from some significant American funds.

What is Clubhouse App?

Clubhouse’s goal is simple, at least on paper: to encourage conversations between users through real-time voice interaction. In short, a social network made up of voices, something that is halfway between a voice chat and a free podcast.

The founding principle of Clubhouse is that of the Rooms, the virtual rooms where discussions take place. Each member can open a Room, becoming its administrator and moderator. And do it in three different ways: Open, Social, and Closed.

Un Aprire room is effectively open to anyone browsing the app.

Sociale room is visible only to interconnected people (for example, those we follow)

Closed room is – as the word itself says – closed, private, accessible only to those who created it and to those who have been invited (a bit like it happens for some Telegram groups).

The first two are perhaps the most interesting ones because they favor the spontaneous and viral aggregation of people who want to discuss a specific topic or at least interested. Yes, because then, as in any social network, there is also the desire to meet new people or, more passively, to stand by the window and watch. Or rather, to listen.

In this regard, it must be said that those who enter a public room are initially silent; they can only listen. To unlock the microphone and speak, he must request by raising his hand. The moderator will grant him the right to speak. The same moderator can also invite other users to communicate and set the maximum number of speakers.

Conversations within a room can last several hours (there is no duration limit). Still, it is possible at any time to leave the room (there is a special Leave quietly button ) and possibly re-enter it later.

At the moment, Clubhouse is not accessible to everyone but only to Apple users who have received an invitation from an already registered friend. The limitations in question, the creators explained, are dictated by load management reasons. The service has already reached two million subscribers in less than a year. Still, it receives many requests for registration thanks to the media echo and some famous users (Oprah Winfrey, Elon Musk and Drake, among others).

If you haven’t received the invitation can still download the mobile application (free) on the App Store and put themselves on the waiting list, waiting for one of the connected friends to officially invite them. For this, it is necessary to enter the telephone number and enable access to the contact list, essential to understanding who – among friends and acquaintances – is already registered.

The Clubhouse social app will also invite us to select our interests based on a series of predefined categories divided by topic (venues, places, sports, news, and so on) to intercept all the interesting public discussions on the platform. And possibly access it.

Clubhouse for Android released in May 2021.

You say social and immediately think about privacy. From this point of view, Clubhouse starts from a position of advantage guaranteed by the vocal experience. There is nothing written and visible, apart from the profile icon and the bio. There is no way for the things said – at least for now – to record the conversations or even to download or share them.

It will be interesting to understand if these conditions will persist over time or if something will change when the numbers become essential. Much will also depend on the business model that will establish itself over time.

From this point of view, Clubhouse voice app could appeal to all those brands that work on brand intimacy or, more simply, to intercept (or promote) discussions of experts and enthusiasts who gravitate around certain business areas. We’ll see.

The Clubhouse has undoubted potential, both as a tool for social interaction and as a catalyst for initiatives of various kinds: from activism (political, environmental, cultural) to new opportunities for relationships with brands and celebrities.

The voice’s presence is undoubtedly the added value that allows you to have a more real and genuine representation of the members. Or, at least, more representative of what classic social networks have offered us so far.

In this sense, Clubhouse has all the potential to become a participatory evolution of podcasts. Therefore, no longer a pre-recorded monologue made by an author who speaks to many, but a more free and open format, catalyzed by common interests.

If we look at from a technical perspective, the audio quality is without any other good. It seems sufficiently equipped to manage the overlaps and background noise even if a lot also depends on the ability of the participants of a room to self-discipline in the interventions, avoiding talking over it.

Having already said the lack of an Android version (which will arrive sooner or later), there is still a lot to do in terms of user experience.

They are starting with the language. For the moment, everything is in English, settings included. It is not always easy to understand who is speaking, especially in a room with many participants.

Clubhouse helps us by assigning a gray profile that lights up around the speaker icon but has not yet provided an automatic system that puts the speaker in the foreground a bit, as it happens in many video chats.

Indeed, considering the current (scarce) opportunities to meet in real life, this is a social network that is very much in line with the times.