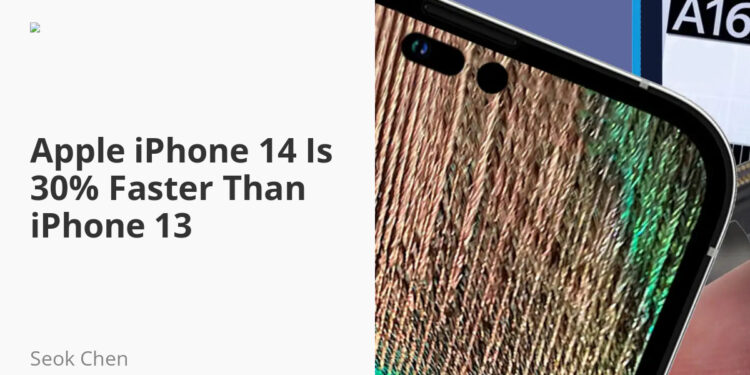 Compared to the iPhone 13 Pro GPU, iPhone 14 Pro models are expected to deliver performance improvements between 25% and 30%.

Considering all that, Apple will be able to provide the best hardware possible for the iPhone 14 Pro and iPhone 14 Pro Max this year. In addition, the new A16 Bionic chip has also been examined by Macworld for its performance improvements.

According to expectations, the A16 SoC will have six CPU cores, two of which will be high-performance. Furthermore, the A16 will ship with 6GB of LPDDR5 RAM, improving memory performance significantly.

However, Apple will still use a 5nm process for the A16 Bionic. TSMC will release a third-generation N4P 5nm processor. The N4P codename is just a codename. In the iPhone 13 Pro and iPhone 14, N4P can deliver an 11% performance boost over the A15 Bionic.

In addition, the A16 is expected to be 22% more energy efficient. Additionally, the new N5 process is expected to deliver a 6% higher density than the original 5nm. Late in 2020, the iPhone 12 debuted with the A14 Bionic.

Taking the memory upgrade into account, MacWorld predicts a 15% increase in CPU speed.

There is also a possibility that the GPU upgrade will be more significant and that Apple’s A-series and M-series SoCs will deliver speeds up to 30% faster than the iPhone 13 Pro GPU, thanks to the faster LPDDR5 RAM.

The iPhone 14 Pro should be even more efficient than last year’s iPhone 13 Pro models, thanks to the next-gen OLED panels and dynamic 120Hz refresh rates. Upgrading a phone’s energy efficiency to improve its performance is essential. However, the battery life can’t be sacrificed by bumping up the speed. The Galaxy S22 showed us what it’s like to throttle the speed if you do this.

It is just a supposition, of course. The reports are based on several leaks and reports from different sources. When the iPhone 14 Pro is released in September, it will offer significant performance and efficiency improvements over the iPhone 13 Pro models.

This will be Apple’s first iPhone series to deliver huge differences between the regular iPhone 14 and the iPhone 14 Pro. The camera hardware and core specs are also different. Due to this, the iPhone 14 models will be variations of last year’s iPhone 13 Pro models, so they’ll be pretty powerful.

As far as performance and battery life goes, the iPhone 13 Pros have no rivals, with the Galaxy S22 series and other Android flagships failing to close. So, it’s only natural to wonder whether the iPhone 14 Pro’s rumored price hike is justified by the differences between it and the iPhone 13 Pro.